I recently read Essentialism: The Disciplined Pursuit of Less by Greg McKeown. It challenges you to do only what’s essential in your life, and eliminate the rest. I believe websites can benefit from Essentialism.

Businesses love to pack features and content into their websites, thinking that more is good. The Essentialist approach instead advocates “less but better,” achieved by focusing on the vital few, not the trivial many.

Let’s look at how this approach can give you less, but better content, and fewer, but better features.

By the way, content refers to the text, images, videos, etc. on a site. By features I mean the functionality, such as a filterable portfolio, shopping cart, or contact form. 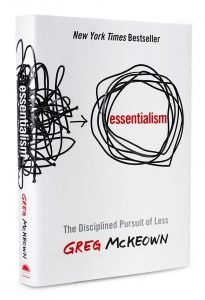 Less But Better: The Vital Few

To focus on the vital few, you must ignore the trivial many: all those “bells and whistles” that you think might make cool additions to the site, but won’t result in you making more money.

Will adding a slider to your homepage make your more money? Statistics say no, in general, sliders aren’t effective. Think about all the other things your site could have, but doesn’t need to have.

If you wrote half as many blog posts, could you make each one twice as good?

By Design, Not By Default

Essentialism explains how to live “by design, not by default.” Websites are often built from templates. That brings certain benefits (templates can save development time and include best practices), but can also cause your site to suffer the mediocrity of the default.

Think consciously and deliberately about your site’s design, features, and content. Should the button to request a quote say “Submit,” (the default) or “Start My Quote!”

What Do I Want To Go Big On?

Don’t fret about having to leave a certain feature or piece of content out of your site. Instead, ask what will be the best feature or content for your site, and aim to knock that out of the park.

Essentialism includes the 90% Rule: as you evaluate an option, think of the single most important criterion, and rate the option from 0 to 100. If you rate it any lower than 90, change it to 0, and reject it. This prevents indecision and settling.

This can be extremely useful when designing or redesigning a website, since it forces you to put only the best on the site. You can also use this when evaluating blog post ideas for an existing site.

If It Isn’t A Clear Yes, Then It’s A Clear No

Essentialism includes a very easy test: “If it isn’t a clear yes, then it’s a clear no.” When you go back and forth and can’t decide whether a feature or content should be on your site, it’s not a clear yes. In that case, it’s a clear no! Leave it out.

What If You Didn’t Already Have It?

Essentialism recommends that when evaluating an opportunity you have, ask, “If I didn’t already have this opportunity, what would I be willing to do to acquire it?” If you wouldn’t do much to acquire it, eliminate it.

You can use this approach to prune features and content from your site. If it wasn’t there today, how much effort would you put into adding it? If the answer is “not much,” then remove it.

Essentialism suggests running a “reverse pilot”: quietly eliminate (or at least scale back) an effort and see if it makes any difference. If it doesn’t, eliminate it.

This is another way to remove features and content from your site. Try hiding or at least reducing the feature or content, and see if anyone notices. You can find out by watching your analytics and user feedback. If no one misses the feature or content, then remove it. Then those things will no longer distract from the better features and content on your site.

Contact us if you need help applying Essentialism to your site.

Take the first step towards a faster, more secure website. Get The Ultimate WordPress Maintenance Schedule.

Don't miss our collection of Tips for Website Owners.