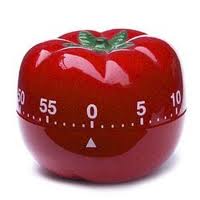 Parkinson's Law states that that work expands to fill the time available for its completion. Think of your projects. How often do you either procrastinate or obsess over trivial details simply because you have the time? I'm a perfectionist, so I'm tempted to spend way too much time on projects.

I use timeboxing to combat Parkinson's Law. With timeboxing, you divide the project (or your day) into fixed time periods that have specific goals. During each timebox, you focus exclusively on achieving the goal, ignoring everything else. At the end of the timebox, you take a break before beginning the next timebox. This forces you to get things done.

I live by GTD (Getting Things Done), and I had heard about the similar Pomodoro Technique, but I decided to really get into timeboxing after seeing it used used on This Week in Web Design, one of my favorite web design podcasts. The technique isn't for everyone, but it works for me.

TwitterFacebookLinkedInPinterestRedditEmail
Filed Under: Websites
Tagged With: