This post has been a draft since August 2012. I intended to publish it once the video of my talk was uploaded to WordPress.tv, but it looks like that won’t ever happen. 🙁 With WordCamp Grand Rapids 2013 nearing, I decided I may as well publish it, sans video. 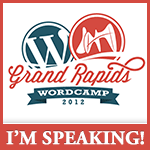 In August 2012, the WordPress Grand Rapids meetup group organized the first WordCamp Grand Rapids (WCGR). A WordCamp is a conference about WordPress, for developers, bloggers, and businesspeople. I volunteered to be an organizer and speaker. I learned a lot about WordPress and met really cool WordPress enthusiasts from the area and abroad. Because I learned so much and had so many valuable conversations, I feel that I gained more than I gave.

I invited Dustin Hartzler, host of the Your Website Engineer podcast to speak, and I’m glad he did! I was finally able to meet him in person. We hung out at the reception for speakers and sponsors on Friday, and on Saturday he recorded a live podcast: Episode 90: Live from Grand Rapids! (audio below). I start talking at 10:25. There’s also a video below the photo.

See you at WordCamp Grand Rapids 2013!

Take the first step towards a faster, more secure website. Get The Ultimate WordPress Maintenance Schedule.

Don't miss our collection of Tips for Website Owners.